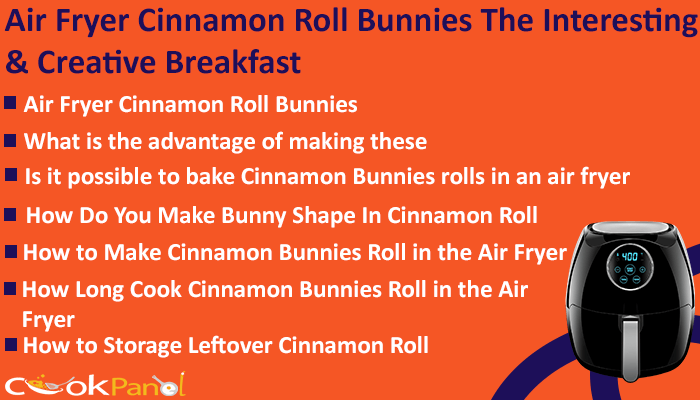 Have you tried making cinnamon buns in an air fryer? Oh yes! Enjoy a delightfully whimsical Easter morning with these Air Fryer Cinnamon Roll Bunnies. Using your air fryer to whip up a quick and easy dessert on Easter morning is a great idea. You may complete your holiday meal with a side of bacon, sausages, or eggs and be prepared for the day.

These cinnamon buns made in an air fryer are perfect for anybody who like the flavor of homemade rolls without the time-consuming preparation. The cinnamon roll dough used here is store-bought. If you have an air fryer, you can have warm, cinnamony deliciousness in a matter of minutes. Furthermore, there is less of a mess to clean up afterward because no oven is needed.

You can quickly whip up this cute rabbit breakfast using cinnamon buns or bread dough you’ve kept in the fridge. This preparation method for cinnamon buns from a can may be unparalleled.

In less than 10 minutes and with only two ingredients, you can have an impressive and appropriate meal for a holiday celebration. But, of course, the kids will be so impressed by your ingenuity that they will beg to help you make these air fryer cinnamon roll bunnies and then devour them the second they are done cooking.

The air fryer creates the crisp outside and soft, fluffy inside cinnamon rolls that we all love. Glaze each mouthful and have a delicious new Easter morning ritual.

What is the advantage of making these?

The obvious perk is getting to eat them, but we’ve also discovered that using an air fryer significantly cuts down on preparation time. They’ll be done in 8 minutes flat, and there’s no need to preheat the oven..

Even older kids may learn to cook with these; my daughter is quite proficient in the kitchen. She enjoys prepping the food for cooking, but we still remove it when it’s done.

Is it possible to bake Cinnamon Bunnies rolls in an air fryer?

Even better than you may expect, the Cinnamon

Bunnies Rolls can be prepared in an Air Fryer. Wonderful cinnamon buns, those are.

They are airy and light on the interior while remaining crisp on the outer. Cooking time for these easy cinnamon buns in an air fryer is as short as 7 minutes..

However, if you can’t get Pillsbury Grands cinnamon rolls, any other brand will do in a pinch. Canned cinnamon buns of any kind will do. The ones we make with cream cheese icing are a hit with my kids.

How Do You Make Bunny Shape In Cinnamon Roll

We made some rather legal decisions, but we have some ambitious ideas for the next time we make choices. Some ideas are as follows:

The ears are flexible and may be shaped by gently pressing and shaping them with your fingertips. While the rough appearance didn’t bother us, we thought it was easy to achieve a smoother one.

The ears may be attached to the rabbit head without water; however, doing so will strengthen the connection.

How to Make Cinnamon Bunnies Roll in the Air Fryer

This is an illustrated guide to the recipe’s preparation. For a printable recipe card with the ingredient amounts and complete directions, please scroll to the bottom of the post.

Unseal the dough from the container and unroll it halfway so it may come to room temperature. The unrolled strip should be long enough for the bunny ears to make the letter m. To make a cinnamon roll, squeeze the center of an m-shaped piece of dough and then pinch the end onto the remainder of the roll (representing the head).

Do the same with the remaining dough. Bake at 330 degrees Fahrenheit for 6 minutes, and turn and bake for an additional 2 minutes in a basket lined with parchment paper in an air fryer. Please feel free to leave yours in the oven for a few minutes more if it hasn’t finished cooking..

Use glaze to top the rolls, then serve right away. If you’re planning on serving it as dessert, you may spice it up with some Easter M&Ms.

How Long Cook Cinnamon Bunnies Roll in the Air Fryer

Time may vary depending on cinnamon roll size, air fryer basket crowding, and cooking temperature, but a decent rule of thumb is 8-10 minutes.

When the rolls’ tops become golden brown, they are done baking and may be removed from the oven to cool.

How to Storage Leftover Cinnamon Roll

If you’re lucky enough to have any cinnamon buns left over, you get to indulge in their sweet flavor again! Refrigerated leftovers can be kept fresh for up to three days if stored in an airtight container. They have a shelf life of a day or two at most.

You may reheat them in the microwave for a few of seconds to get them back to their warm, soft form.

Can Cinnamon Rolls Be Cooked In The Air Fryer?

Adjust the temperature on the Air Fryer to 360 degrees F. Spray the Air Fryer’s basket with nonstick cooking spray or line it with parchment paper to prevent food from sticking. Fill the basket of your Air Fryer with the cinnamon roll dough, and leave some room between each roll. Put the cinnamon buns in the oven and bake for 8 minutes.

Can You Cook Frozen Cinnamon Rolls In An Air Fryer?

You may use cinnamon buns from the freezer, the fresh bakery, or your recipe in an air fryer. Better results are achieved than when baking in the oven. This recipe is a home run because of the light, airy dough and the crisp, golden crust. If you’re looking for something to make in your air fryer, try these baked apples or these simple hash browns.

In conclusion, the Cinnamon Roll recipe requires minimal effort and time in the air fryer. All events can benefit from using this formula. Learn how to make cinnamon rolls in an air fryer with our step-by-step guide. I hope you find this blog informative and that you love this dish.