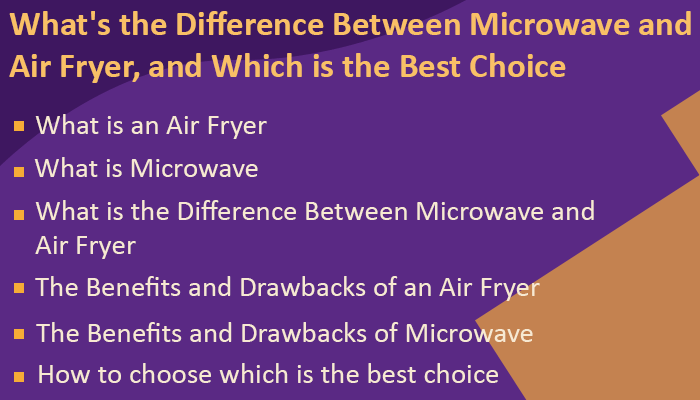 In the present situation, there is a plethora of kitchen gadgets that may be utilised to produce some of the most delectable dishes. In this informative piece, we’ll look at the significant difference between microwave and air fryer to determine which is most efficient.

Some gadgets, such as the microwave, are relatively traditional but incredibly functional. Others, such as the multipurpose air fryer, are newish to our kitchens. With such a vast array of culinary gadgets at our disposal, picking which one to use in preparing your meals may be very intimidating.

In this essay, I will discuss every appliance, what they perform, and what the distinctions are, as well as which is more appropriate for you and whatever you need.

What is an Air Fryer

An air fryer is a compact kitchen gadget that uses very little oil to bake and cook dishes. It’s an unique countertop convection oven with a top edge heating mechanism and a fan to distribute heat evenly across the gadget.

How Does it Works

Convection heating is used in an air fryer to heat food. A heat source generates heat, which is subsequently spread around the food by a fan. It’s akin to a little convection oven.

In a typical deep fryer, the food is cooked by immersing it in hot oil. Instead of immersing the food in oil, an air fryer softly covers it in oil as air circulates around it.

The heating element and the fan are the major elements of the air fryer. The coil is normally positioned above the food supply and may reach temperatures of 400 ℉. The fan rotates the heated air, while one or more vents enable unwanted hot air to escape.

The most basic functions are a timer and temperature changes. Depending on model, these adjustments may be accessed by a knob, a button, or a digital display.

Deep fryers are frequently replaced by air fryers. French fries, fried chicken, and other fried meals are all possible. An air fryer, on the other hand, may be used to cook steak, sausage, bacon, and other foods. You can also heat veggies, bake cakes, and poach eggs in certain air fryers.

Depending on the type of food you are cooking, you should usually gently cover it with oil before cooking. Some individuals use a spray bottle to lightly sprinkle the meal with oil, while others cover it with a tablespoon of oil. As opposed to deep frying, both methods use far less oil, allowing you to cook healthier meals.

Microwaves utilise convection heating, while air fryers employ microwaves. A microwave (convection or solitary) is a gadget that, despite its modern look, has been around for a long time.

In layman’s terms, a microwave oven generates microwave radiation and directs it at your food. These microwaves then swiftly heat small clusters of water on the outside 3 cm or so of your meal, instantly heating it up.

How Does it Works

Microwaves lack a heating element that produces heat to prepare the food. They do not, in reality, generate heat directly.

A magnetron is a component found in microwaves. Microwaves are produced by the magnetron.

The metal within the device prevents microwaves from escaping, protecting you from radiation exposure. The metal chamber is also necessary for cooking.

The microwaves bounce about within the metal chamber because they can’t get out. The water particles inside the meal vibrate as they strike it. Because the molecules vibrate at such a high rate, heat is generated. As the atoms heat up, they transfer heat to other atoms, thus cooking your meal.

A typical oven warms your food by using a heat source that emits heat as it heats up. Because heat is transferred through the oven, your food will be cooked from the outside, which is why the sides of your pie may burn while the middle remains cold.

When you microwave a tiny pie, the middle may be quite hot while the borders remain reasonably chilly. The pie contains the middle, which has a  higher water content than the outside shell.

Because microwaves shake the water vapor, the regions of the meal with a high moisture content heat up faster. It’s also why microwaves can quickly dry out food.

What is the Difference Between Microwave and Air Fryer

The primary distinction among air fryers and microwaves is that microwaves can warm and defrost food, but air fryers alter the way food is cooked. A microwave will be required if you wish to heat or cook meals. If you want to cook and receive fryer-quality food, an air-fryer is a good option. We’ve outlined the main differences between the two machines to help you choose which one is the better choice to buy.

Let us begin with the air fryer. Surprisingly, the air fryer does not “fried” the food as one might assume. The texture and ultimate product vary significantly from that of deep-fried food. The air fryer contains an inside coil that heats up similarly to a coil stove.

A fan is installed to distribute the heat from the coil to the cooking pot. That chamber houses all of the goods you place in it, and the hot air evenly cooks the food.

A microwave oven works by continuously emitting microwave radiation to heat the food. The transformer within the main chamber converts the power to a 2.45 GHz radio wave.

The transformer blasts the waves onto the food as it spins on a rotating platform. This assures that heat is properly spread throughout the meal. The surplus waves on the food are reflected by the internal walls of a microwave oven.

In terms of cooking time and speed, air fryers and microwaves tie. The air fryer cooks up to 25% more quickly than microwaves, but at a smaller volume. Microwaves, on the other hand, may cook at a slower rate but in bigger quantities.

Slow cooking, on the other hand, has its advantages. A longer cooking duration ensures that the meal is more flavorful. However, reheating food in the microwave typically loses flavour, but the air fryer constantly strives to conserve as much flavour as possible.

They’re both really good at what they’re supposed to be good at. If you are preparing a huge amount of food, microwaves can cook it faster.

When choosing kitchen appliances, capacity and size are two of the most significant aspects to consider. Although air fryers are so tiny in comparison to microwaves, they have a drastically lower cooking capability.

Because air fryers are small and lightweight, they cook a smaller amount of food. but an air fryer has a max capacity of 5 litres. As the adage goes in the kitchen, “The greater the size, the better the cooking ability.”

Food prepared in a microwave uses a small amount of oil, but food prepared in an air fryer uses so little oil that it is thus incredibly healthy. The less oil there is in the dish, the better it is for you. If you need to eat healthily, use an air fryer.

Both appliances provide healthier dishes than deep-fried products. Air fryers allow you to manage the temperature while keeping the food moist without the use of additional oil. However, when preparing meat-related dishes in the microwave, at a minimum, a tablespoon of oil is necessary, and much more when cooking in the microwave.

A microwave uses less electricity than an air fryer. Versions such as Ultrean air fryers utilise roughly 1500 watts, with some models reaching 1700 W. According to consumer feedback, a microwave needs 1200W for around 30-40 minutes of cooking, with an extra 2-7 watts for other tasks such as reheating.

The Benefits and Drawbacks of an Air Fryer

The Benefits of an Air Fryer

Because hot circulating air cooks food uniformly from all sides, air fryers provide a crispier flavour than microwaves. This removes the need to turn the meal repeatedly, which normally results in the loss of certain critical nutrients. Proteins, for example, get denatured when cooked in microwaves due to the intense heat exposure.

You may cook with a small bit of oil.

An air fryer is simple to use, clean, and store.

Drawbacks to an Air Fryer

Air fryers are not appropriate for heavy-duty cooking since they require more cooking time than traditional methods. It is not capable of cooking larger amounts of food at the same time.

The price of an air fryer is more than that of a microwave.

When in use, it has a metal exterior surface that becomes heated. As a result, touching it is risky.

This gadget only has a few pre-set cooking programmes, whereas microwaves offer practically all possibilities, such as reheating, defrosting, grilling, browning, and so on.

The Benefits and Drawbacks of Microwave

Microwaves are better than air fryers because they only produce heat from the inside of the glass-covered cavity. Unlike air fryers, this encourages you to touch them as they cook. They are extremely simple to maintain because to their flat surfaces, which do not require scrubbing.

Microwaves are inexpensive and widely accessible.

Microwave ovens may be used to cook huge amounts of food at once.

They heat the meal from one side exclusively, leaving a frigid patch in the centre.

While cooking, the microwave generates non-ionizing radiation that is harmful to people and removes important nutrients such as proteins.

Item cooked in microwaves may have a chewy texture due to an uneven conduction of temperature all through the food.

How to choose which is the best choice

The ultimate decision is based on your cooking needs. If you require more cooking capacity, you can look for a highest microwave in our showcased section. The air fryer device is ideal for a wide range of flavours.

Microwaves and air fryers are both modern kitchen appliances that make life easier and more convenient. You can select one of them based on their unique use.

Which is better microwave or air fryer?

In brief, air fryers are far more nutritious than microwave ovens. Microwaves may require a little amount of oil, but air fryers do not, since frying, cooking, or any of the other operations that air fryers are able of do not require any oil at all.

Can an air fryer replace a microwave?

Whereas an air fryer may appear to be a viable replacement for a microwave oven, it does not replicate the simplicity, speed, and technique of cooking that a microwave doesAn air fryer can replace a standard or convection oven, but it is not a microwave.

I expect this has cleared up any confusion about air fryers and microwaves. They are both excellent appliances with distinct properties. It doesn’t make sense to push them against each other when they each excel in different areas.

You obviously know what they’re like, so decide what you need based on that. Thank you for visiting, and I expect I was able to assist you in deciding which product to purchase.

You already know how they are, so base your decision on that. Thank you for visiting, and I expect I was able to assist you in deciding which product to purchase.