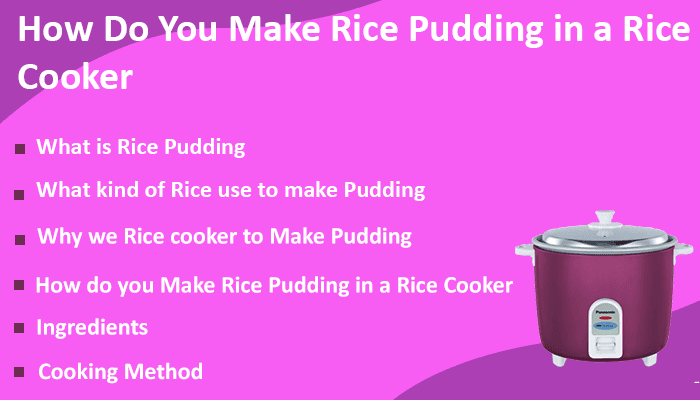 A rice cooker is an underutilised piece of equipment in Western kitchens, although it is ubiquitous in Asian kitchens. What most people don’t understand is that a rice cooker can prepare more than just rice.

This is one of the advanced digital rice cookers that can identify when rice is correctly cooked, but it can also extend to other particles, and some can also function as steamers, bread makers, or slow cookers. Now we’ll discuss how do you make rice pudding in a rice cooker.

There are numerous methods to prepare rice pudding: on the stove, in the oven, in a rice cooker like this one, or in an Instant Pot. All of the recipes I’ve tested include the same fundamental components, with slightly varying spices, but the cooking procedure is unique.

What is Rice Pudding

Rice pudding is nothing more than rice cooked in condensed milk. As the rice cooks, it releases starch into the milk, thickening it and suspending the fragile grains of rice, adding to the creaminess. You may begin with either uncooked or cooked rice, which is ideal if you have leftover rice. This recipe includes instructions for both.

What kind of Rice use to Make Pudding

Rice is the main ingredient of rice pudding. No doubt, we have so many varieties of rice. But I, too, enjoy jasmine rice. I definitely prefer basmati or jasmine rice. They are both quite aromatic and give a lot of flavour to the kheer.

If you do not have long-grain white rice on hand, you may use standard medium-grain white rice. If you are using short-grain rice, the pudding might become “thicker.” And these thickeners enhance the taste of your pudding.

Why use a Rice Cooker to Make Pudding

On the stove, the quickest I can cook dessert is 45 minutes. This is also after 30 minutes of soaking the rice. You should also stir it often. Now that I know how to make pudding in a rice cooker, we can prepare dessert in a fraction of the time and with minimal stirring. I’m really good at setting and forgetting!

I’m fairly enamoured with my Instant Pot and have used it as often as possible. These tools are now basics in my kitchen. I wouldn’t be able to function without them. Although my Instant Pot may technically be substituted with a rice cooker, I have so much fun with it that I’m ready to give it up.

How Do You Make Rice Pudding in a Rice Cooker

This rice pudding recipe is quick and easy to make, and you’re likely to have all of the ingredients on hand because they’re quite common. What you’ll require is as follows: The main components of rice pudding are as follows:

You may use raw long or short-grain white rice in this dish, but not raw brown rice, which needs more water to a boil than white rice. However, if you’re started with cooked rice, either white or brown rice can be utilized. Jasmine rice has a wonderful flowery taste and is my preferred rice pudding rice.

Any type of milk will do, but the higher the fat levels, the creamier the outcome. Do you need to eat dairy-free or vegetarian? Take unsweetened dairy free milk: one of our editors recommends cashew milk, and I believe oat milk would taste delicious.

Begin with a third of a cup of icing sugar and add further at the end if you would like it sweeter. Feel free to experiment with other types of brown sugar or solvent sweeteners, but start with a few teaspoons and add much more taste.

Just a little salt takes out all the flavours, so don’t omit it.

Rice pudding can be modified with ingredients such as crushed cinnamon or walnuts. Feel free to experiment with your favourite toasty seasonings or dried fruit.

Use the measuring cup that came with your rice cooker to measure out your long or short grain rice . This measuring cup normally holds 6 ounces, or around 3/4 cup of rice. Initiate with two of those measurements for this recipe.

Measure the rice first, then rinse it in cold water, then add the rice, water, and salt to the rice cooker and turn it on. Cook till it automatically switches to warm.

When the rice is done and the preset has been changed to warm, remove the cable from the power, stir once, and set aside for 15 minutes to chill.

Close the cover and set the cooker to the WARM setting after adding the blended milk to the rice. After thirty minutes, check to see whether it has attained the appropriate consistency.

Place them on separate serving plates and top with powdered cinnamon and cream, if preferred.

Can You Put Milk in a Rice Cooker?

In a rice cooker, mix five cups of low-fat milk, rice, sugar, and cinnamon; stir to incorporate. Cook on high for twenty minutes, or until the rice is soft and creamy. Stir in the additional two cups of milk. Let it cool until serving.

What Else Can You Cook in a Rice Cooker?

Rice cookers can prepare more than just rice. The gadget may be used to prepare foods such as ribs, chilli, or pizza. Rice cookers could also be used to cook other grains such as wheat or quinoa. In a rice cooker, you may also make breakfast items such as oatmeal or cakes.

Is Rice Pudding Good For Your Health?