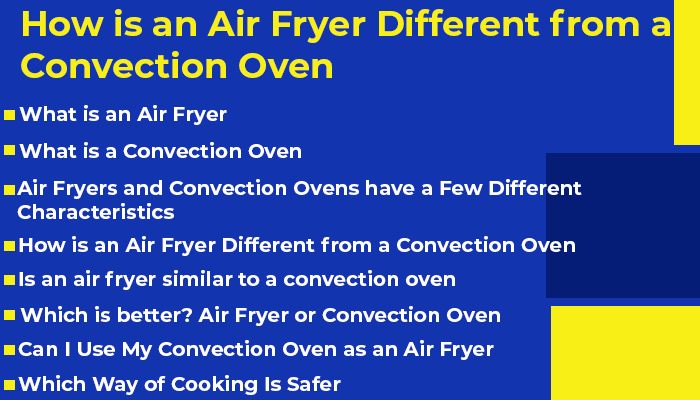 A lot of the greatest air fryers include ten or more distinct cooking modes that allow you to roast, grill, bake, toast, dehydrate, and crisp your food. We get a lot of inquiries about how is an air fryer Different from a Convection Oven.

Air fryers and convection ovens both use a fan to circulate hot air to prepare a meal more faster than conventional ovens. Although convection ovens cook at a slower rate, air fryers cook even faster because of the location and size of their fans.

What is an Air Fryer

Before we get into how an air fryer works, let’s talk about what an air fryer is. Convection ovens take up a lot of space, but air fryers are around the size of toaster ovens. If you’re not using them, they may be kept in a pantry or cupboard because they’re small enough to be stored there. To cook your food, air fryers employ convection heating to move air around a basket of food.

As though your meal has been deep-fried to a delicious, crispy goodness without the oil and added fat, a fan inside keeps the flow moving quickly. Overall, it’s a much healthier choice than the original.

Heating elements and a fan circulate hot air in the frying chamber of air fryers in the same way that convection ovens operate.

In comparison to convection ovens, these machines are generally smaller and move the air more quickly.

Using only a spoonful of frying oil and little or no pre-heating, an air fryer may produce excellent results in a short period of time.

Crunchy and golden on the outside, yet supple and juicy on the inside, can still be achieved with this method. We recommend that you use your air fryer to experiment with new recipes and save deep-fried meals for special occasions. Aside from frying chicken wings and fries, these appliances may be used for much more.

There are lots of large-capacity air fryers available if you need to cook larger amounts of food, because many air fryers are too tiny to replace your oven realistically.

What is a Convection Oven

Heating elements and fans work together to circulate hot air around your food in a convection oven, making it cook quickly and more uniformly. It is common for convection ovens to be rectangular in shape, with a door at the front. Depending on their size, convection ovens can be as large as standard ovens or as small as countertop appliances.

Because of the power of convection heating, food is baked more quickly and evenly in convection ovens than in regular ovens. Pastries, cookies, roasted vegetables, casseroles, rotisseries, and roasted poultry can all be cooked in a convection oven. Also, it may be used to reheat frozen meals. Convection baking is an option on many intelligent ovens, allowing you to bake with or without convection.

Air Fryers and Convection Ovens have a Few Different Characteristics

Both air fryers and convection ovens use the same concept of circulating hot air inside a cooking chamber, but they are different in the following ways:

Unlike convection ovens, which are incorporated inside larger ovens, air fryers are portable and easy to use. Toasters and air fryers with convection heating are made for counter-top use. In addition, because it brings the food closer to the heating components,

It cooks it more quickly. Several types of ovens, including toaster and convection, now provide an air fry setting.

An air fryer’s heat is generated by the device’s lid. In contrast, heat is distributed evenly throughout the oven using a convection system.

With this more focused and top-down cooking method, air frying produces fantastic results in a matter of minutes.

A fan is located right behind the heat exchanger at the very bottom of an air fryer. In convection ovens, the fan is hidden away in the rear of the oven, either at one edge or flush in the center.

A convection oven’s fan is often smaller and slower than an air fryer’s. The fan speeds in conventional ovens are typically around one-third faster than those in convection ovens.

There are several piercing attachments for air fryers that enable for rapid and uniform frying with minimum turning or tossing, making them ideal for food preparation. In addition to air fryer containers, there are also rotisserie spindles, racks, and kebab-skewer spits to choose from. Additionally, small baking pans or cans of food can be placed on the rack.

How is an Air Fryer Different from a Convection Oven

On the other hand, the size of convection ovens is much greater than that of air fryers, so you’ll be able to fit a lot more food into the oven.

Is an air fryer similar to a convection oven?

There are no significant differences between these two appliances when comparing them.

Some air fryers may not perform as well as convection ovens when it comes to cooking food.

The biggest difference between a regular oven and a convection oven is the amount of room you’ll have to bake large quantities of cookies or muffins.

Which is better? Air Fryer or Convection Oven

In an air fryer, you may cook with significantly less oil than you would in a conventional oven, and the surplus fat will be drained into the drip pan, preventing your food from absorbing any of it while it cooks. In addition to lowering your caloric intake, this method also improves the crispiness of your meal.

All but the largest air fryers are likely to fall short if you’re looking to cook huge volumes of food. When using an air fryer, most meals must be fried in a single layer, even if you want to stack your fries. To achieve this, you’ll need to toss your fries at least once throughout the cooking process.

Some air fryers may also cause quite a ruckus for those who are worried about noise. Before making a purchase, read several customer reviews to be sure there aren’t any nasty surprises.

Can I Use My Convection Oven as an Air Fryer

Numerous air fryer recipes that require a lower temperature than a regular oven may be used in a convection oven as well. Using an air fryer basket tray, Button notes, the process is fairly similar because the airflow is sufficient for air frying.

Crisping foods in a convection oven using a pierced tray or even a big air-frying basket will assist in achieving the same air-fried outcomes, especially when making egg rolls and jalapeno poppers in an air fryer.

In order to utilise a convection oven, you can typically double the recipe for air-fried broccoli, air-fried buffalo cabbage, and air-fried chicken nuggets; just be sure to spread the food out so that the air can reach all sides of the food.

However, take into consideration that air fryers cook somewhat quicker than convection ovens, so certain air-fryer recipes may take longer to warm up in an oven. Every 2 or 3 minutes, check to see whether the food has browned as instructed in the recipe.

Which Way of Cooking Is Safer

An air fryer allows you to use as little as a spoonful of oil if you so want. Even if you don’t use any oil, your meal will come out crunchy because of the unit’s rapid heating and high temperature. Using a convection oven won’t give you the same results.

Convection ovens produce equally beneficial outcomes when cooking recipes that don’t call for any oil in the first place.

It’s always a good idea to use convection cooking while roasting meat or veggies. They cook more quickly and uniformly, and the drier conditions result in crispier skin and greater caramelization of the exteriors.

What Temperature Do You Air Fry in a Convection Oven?

To utilise this food preparation mode, arrange your food on the rack, click the Air Fry button on your oven’s control center, choose the correct temperature between 350 and 500 degrees, then choose “Start.”

How Do I Convert an Air Fryer Recipe to a Convection Oven?

Now, let’s get to the air fry technique conversions! The method for following traditional oven recipes is as follows: Cooking time should be slashed by roughly 20%, and the temperature should be lowered by 24°C. Cooking time in minutes is multiplied by 0.8 to get the total cooking time.

In the end, the choice between an air fryer and a convection oven boils down to interpretation.

This isn’t an either/or situation for many customers. You don’t have to give up your convection oven just because you bought an air fryer.

When it comes to cooking, an air fryer may be a terrific addition to any home, but it should not be considered as an alternative to your convection oven.

Toaster oven and air fryer combinations are also available if you’re still indecisive. These versatile and powerful countertop appliances combine the best of both worlds.