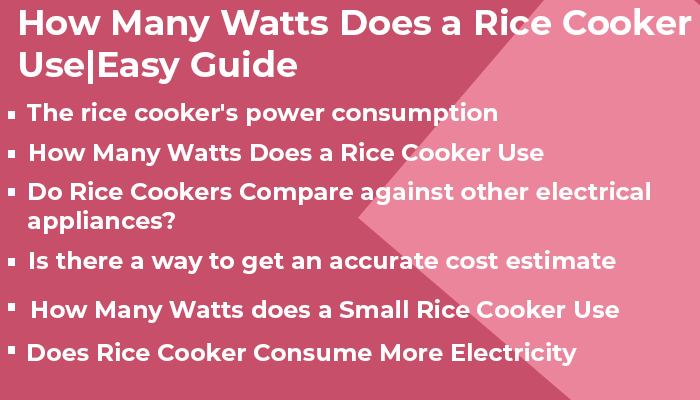 Domestic appliances that developed in Japan and eventually spread to the United States are known as rice cookers. For many women, cooking rice may be a challenge because of the need for close attention to prevent it from burning and becoming sticky. How much power does each of these gadgets require, and how many watts does a rice cooker use?

It all depends on the type and size of the rice cooker you have, how often you use it, and how long you normally leave it on the reheating option. Your rice cooker’s energy consumption will vary greatly depending on where you live. In this post, we’ll discuss the rice cooker, watts and energy usage and the factors that influence it.

A standard rice cooker uses 0.4 kWh of electricity each hour. An hour’s use might cost as little as 0.048 cents.

How Many Watts Does a Rice Cooker Use

The best and quickest method to find out is to tick the box. It’s still possible to find specific companies that don’t list their wattage specifications on the product or write it in different languages.

We’ve been using a Chinese-made rice cooker with the specs printed in Chinese characters on the box for a few years now.

So, how can we figure out the rice cooker wattage? Make use of the model number to find it online! You can get yours like that. Check the company’s website, which has worked for many folks.

To get a general notion of a rice cooker’s wattage standard, most of them are comparable.

In general, most rice cookers have a wattage rating of 400-500 watts, while specific multi-cooker models can have wattage ratings considerably higher than this.

The 8-quart Electric Kettle Duo, for example, uses a 1200 watt power supply to handle its many cooking modes.

Do Rice Cookers Compare against other electrical appliances?

Compared to a microwave oven, a refrigerator, or an air conditioner, rice cookers consume less watts of electricity of amperage and volts since they are small appliances that draw just a little amount of energy.

Even if you use the rice cooker every day and keep it running for hours at a time, it will not require as much electricity as other home equipment.

Rice cookers usually are not left plugged in all the time and are only used for an hour a day, so they use less than 1% of the total energy consumed in your home over the year.

Is There a Way to Get an Accurate Cost Estimate?

Based on the example above, you can figure out how much it costs to run your appliance with a bit of arithmetic.

We paid 45 cents for every cup of rice we cooked in an hour. This results from dividing 1000 (watts per kilowatt-hour) by 1000 (cups per hour) and multiplying this by the number of cups used. You’ll know exactly how much it will cost of running your machine this way.

Consider that rice cookers can cost anywhere from $25 to $300 or more, and you may be encouraged to buy inexpensive and think that this is a way to save money. For example, the Zojirushi line of rice cookers (one of my personal favorites) has innovative features such as fuzzy logic, which provides excellent results and saves a significant amount of energy throughout their lives.

How Many Watts Does a Small Rice Cooker Use

Usually, a conventional rice cooker requires between 400 and 1000 watts of electricity in cook mode and 30 to 50 watts in warm mode. Therefore, every time you use the rice cooker, it will use about 0.7 kW and cost you about $0.043 per usage.

The tiny ones are between 300 and 400 watts, or around three amps, which is about double the power of a small crockpot. A simple way to heat water, boil an egg, and cook a little one-pot dinner.

Rice cookers use 0.5 units of power per hour to cook rice, while stovetops use up to 3 units of electricity per hour. This means that the cost of using a rice cooker for cooking rice will be lower than cooking it on a stovetop. Because of this, a rice cooker might save you money on your power cost.

How Much Wattage Does a Rice Cooker Use?

To cook a typical pot of rice, a conventional electric rice cooker uses just about 600 to 700 watts of electricity. It takes roughly 30 to 45 watts to keep the rice warm after it has been cooked.

How Do Rice Cookers Save Electricity?

Make sure the cover of the oven is securely fastened. After use, it’s advisable to unplug the rice cooker to avoid overheating the rice, although they can use the “Keep Warm” feature if they cannot consume the rice immediately.

Electric elements are placed in a circular ring around an inner pot to heat and boil rice. About 700 watts of electricity are used while food is being cooked. (water evaporated from the meal) and 30–45 watts are used after the food has been cooked.

If you don’t plan on using your rice cooker every day, it’s not going to affect your power cost. You should not anticipate paying more than $50 a year to run your rice cooker, even if you are one of the rare individuals who will use this valuable equipment regularly.

After each usage, switch off and unplug your rice cooker to reduce its energy use. Additionally, rice cookers should never be kept on the hot level for more than 2 hours.

After this point, you run the danger of the rice spoiling because of germs growing on it, and you also use more energy from this machine than is necessary for the job it has already accomplished.