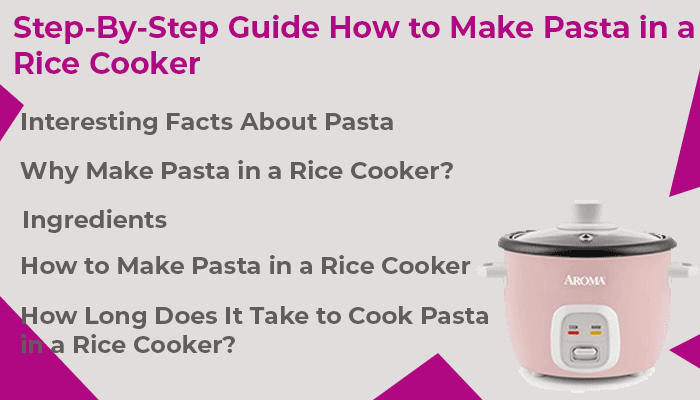 The information on this page, including some interesting trivia about pasta and several recipe ideas, will be helpful to you in the future. Enjoy!

When cooking, the pasta will not cling to the bottom of the pan. As a result, if you’re a novice cook looking for some pointers, you may use the rice cooker to prepare pasta. As a result, preparing the meal will be a breeze.

Every year in Italy, the average person consumes 51 kilogrammes of pasta on average. Pasta, by the way, can get expensive.

When serving it, you should always match the pasta’s structure and depth to the sauce’s texture. Thick pasta and noodles go well with tomato sauce and other hearty, meaty sauces, but thin, delicate pasta sauces need to be paired with lighter sauces.

Eggs are found in egg noodle soups. A noodle is defined by a certain set of rules and guidelines. Noodles are defined as anything that contains more than 5.5 percent egg solids.

Colorful and vibrant varieties are available, as well as the standard beige kind. For instance, spinach is used to make green pasta, whereas tomatoes are used to make red pasta.

Regardless of what sort of pasta is being manufactured, pasta is created using the same technique across the world.

Why Make Pasta in a Rice Cooker?

Cooking pasta in a rice cooker eliminates the need for a lot of cleanup. There is no draining, no need for several pots, and the water doesn’t run over the edges like it frequently does when you cook it on the stove.

Additionally, making pasta in a rice cooker frees up room on the stove and oven. For large family gatherings or events when many dishes are being prepared at the same time, this is especially crucial to keep in mind.

How to Make Pasta in a Rice Cooker

The capacity of a rice cooker is determined by the amount of cooked pasta it can hold. Due to how much water dried pasta takes in and multiplies in size when cooked, this must be done carefully. Typically, one cup of dried pasta yields 2 cups of cooked pasta, but this is not always the case.

Step 1-Put the pasta and water in a pot.

Based on the kind and form of pasta, the amount of pasta to water needed for cooking will be determined by the recipe. It is generally accepted that pasta should be covered by an inch of water if you want your spaghetti to be soft. For medium-done to well-done pasta, fill the rice cooker halfway with water, and for al dente pasta, fill the rice cooker until both the water and pasta are at the same level.

In order to add a little flavour to the pasta, I propose changing the water in which it is cooked. In fact, seasoning the pasta with a small amount of salt before it begins to cook is preferable to adding salt after it has finished cooking. By following these instructions and cooking your pasta in this manner, your overall health will be greatly improved.

In order to prevent the water from foaming and even boiling over, add one teaspoon of olive oil to the pan of pasta. When cooked, the pasta has a good flavour and texture, and the sauce can be added more easily.

Close the cover of the rice cooker and press the “cook” button. The pasta takes around 10 minutes to cook.

In order to prevent the spaghetti from sticking together, I recommend opening the cover from time to time and stirring it. It’s also a good idea to taste the pasta to determine whether it’s done to your satisfaction.

It’s a good idea to drain out any excess water after you believe the pasta is done cooking, and make a note to put 14 inches less water in the rice cooker when you do it again. It’s all about learning by doing, so don’t anticipate perfection the first time around.

How Long Does It Take to Cook Pasta in a Rice Cooker?

Preparing rice in a rice cooker and making pasta in a pasta machine both require the minimum amount of time feasible. It takes roughly 10 minutes to cook pasta in the  rice cooker.

The only thing you need to do is add some water to the pot and turn the heat on. Preparing pasta in boiling water is a common practise.

There are several ways to prepare pasta, each tailored to the individual chef’s preferences.

A rice cooker may help you create a dish and have it ready to use. Pasta should be cooked in a pressure cooker for around 10 minutes.

If you overcook your pasta, it will turn out like mashed potatoes. Keep to the instructions in the recipe for a delicious meal.

However, I’ve provided instructions on how to cook pasta in a rice cooker in the next section for those who are interested in learning how to make pasta.

Can you cook pasta in the rice cooker?

Rice cookers may be used to prepare a variety of foods, including rice. Add salt and pasta to the boiling water and carefully swirl the spaghetti to prevent it from sticking to the saucepan. Pasta should be al dente or done to your liking after around 10 minutes in a rice cooker covered with a lid.

How much water do you use to cook pasta in a rice cooker?

With a rice cooker, you can simply boil the pasta and then add your own cheesy sauce to it. This requires adding water to the boiling pot, typically 6-8 cups for around half a pound of spaghetti. A sprinkle of salt should be added to the spaghetti before it is transferred to the pan.

Can anything else be cooked in a rice cooker?

More than simply rice can be prepared with a rice cooker, You can use the equipment to make ribs, chili, and pizza.There are many additional grains that can be cooked in rice cookers, such as barley or quinoa. Oatmeal and pancakes may also be made in rice cookers.

In order to get the most out of a rice cooker, you’ll need to be creative with your pasta dishes. I prefer sauce pasta over plain spaghetti, despite the difficulty of preparing it.

There are a variety of top-rated rice cooker brands, each with their own set of functions. The greatest option is the one that is most cost-effective.

According to research, rice cookers capable of making a variety of dishes, such as pasta, are the best.