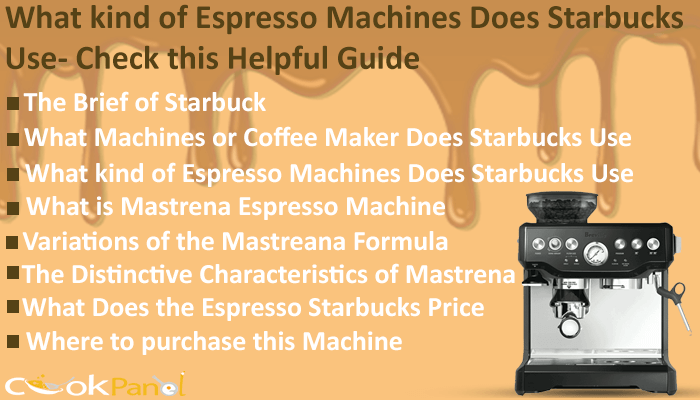 Starbucks employs an espresso machine manufactured by Thermoplan AG of Switzerland, known for its high-tech design and reliability. In addition, Mastrena, a high-performance espresso machine, was chosen since it was the only machine model offered when Starbucks contracted with the manufacturer.

Do you wish to obtain one? You could be in for a rude awakening if you assume you can buy the identical espresso equipment that Starbucks uses.

To learn the rationale, continue.

The Brief of Starbuck

In 1974, Domenic Steiner started a firm called Thermoplan AG. The company’s significant focus then was on producing fully-automatic espresso machines. It had 125 employees and was thus deemed a medium-sized business.

One of the company’s most significant turning points occurred in 1999, when Starbucks, a worldwide network of coffeehouses, patented exclusive rights as its espresso machine provider. The Central Swiss Chamber of Commerce recognised Thermoplan in the same year that McDonald’s and Ikea started using the company’s technology..

Below are details on the two distinct Mastrenna models utilized by Starbucks; however, the general public cannot acquire these machines due to exclusive rights. It has two separate hoppers for the beans and could brew espresso in various sizes. As a bonus, this steam wand is equipped with a temperature sensor and timer that work automatically.

What Machines or Coffee Maker Does Starbucks Use

Starbucks will only employ top-tier equipment to brew its various coffee offerings. It makes espresso with the Mastrena coffee machine, designed specifically for Starbucks by the Swiss firm Thermoplan. The Clover coffee machine is what Starbucks uses for its single-cup brews. Clover is a brand of coffee makers made by a firm owned by Starbucks.

Read on to learn more about the equipment used at Starbucks, including the Clover and Mastrena Espresso machines, and the benefits of employing them.

A Mastrena automated espresso machine and a Clover coffee machine are used at Starbucks. These, therefore, are the top-tier espresso makers and single-cup brewers on the market today.

In addition, the electronic controls on both coffee machines facilitate use. The devices also ensure that each batch of coffee is uniform in flavour, which is crucial for quality assurance.

What kind of Espresso Machines Does Starbucks Use?

I’ll give you the cliff notes if that’s what you want. Thermoplan AG, a Swiss firm, makes the espresso machine that Starbucks employs.

While each Starbucks location may employ a slightly different model, the Mastrena super-automatic espresso machine, presently in its second generation, can be found in the vast majority of Starbucks locations worldwide.

Starbucks uses a particular coffee machine that isn’t available to the public. So is the Mastrena super-automatic gun different from others? No. In a word, no.

It’s a super-automatic espresso machine that works like any other, except it was built in Switzerland.

What is Mastrena Espresso Machine

The Mastrena CS2 espresso machine is a single large computer built with user-friendliness and speed in mind from the ground up. This commercial espresso machine is so advanced that it can brew more than 240 cups of coffee every hour. A monster, indeed!

It has a big bean hopper so you can load it up with a tonne of whole coffee beans at once. Each espresso shot begins with the coffee being put into the machine and processed by the burr grinder.

The Mastrena II is not your average Starbucks espresso machine; it uses cutting-edge AI technology.

The devices are linked to the so-called “internet of things” and send information to a centralized location.

Information like consumer tastes, machine upkeep schedules, digital recipe upgrades, and even anticipated future malfunctions are all tracked and evaluated in real-time using the data sent from the coffee shop.

What makes the Mastrena Espresso Machine so appealing to Starbucks

Full automation and user-friendliness make the Mastrena Espresso machine popular among baristas. That way, creating and pouring a cup of coffee, from grinding the beans to the final pour, is a breeze.

In addition to being user- and maintenance-friendly, the Mastrena Espresso machine’s digital interface and adjustable grind settings make it a pleasure to use.

In addition, the baristas have complete command over the coffee-making process thanks to the automated controls.

The Mastrena not only helps the baristas make great coffee in a hurry but also allows them to multitask during peak customer service times.

The baristas can handle the demand since the digital controls have a memory and can queue up beverages in advance. Moreover, since the high-capacity hopper doesn’t need to be regularly replenished, the baristas may efficiently serve many customers without slowing down service.

Further, the Mastrena design was tweaked so baristas could see and engage with consumers, keeping with the Starbucks ethos of pleasant customer service.

Variations of the Mastreana Formula

This super automated espresso machine was created for Starbucks and sold exclusively by them until 2008. The black and white CTS2 brand name produced the Verismo 801.

2 Type of Mastrenna, in Black and White

This model retains the latter’s core mechanics as an improved variant of the Verismo 801. However, this model was made smaller in response to complaints from Starbucks CEO Howard Schultz that the height of the earlier model got in the way of baristas interacting with customers.

Thermoplan’s new “The Tiger” model, which blends elements of the Verismo 801 and Thermoplan Tiger, is a smaller-capacity espresso machine with a similar design. Books released by Bunn that are currently sold in the United States may be found in this list.

The Distinctive Characteristics of Mastrena

Precision in Dosing and Tamping

Compressed (tamped) to the same level, using the same quantity of coffee grounds is another key to maintaining product consistency.

This has a significant role in the whole infusion time, thus, having it automated and consistently reliable is ideal for Starbucks.

The computerized menu system included with the mastrena espresso machine makes its operation so intuitive that even a child could operate it.

The fact that it is computer-controlled further eliminates the potential for mistakes. With the push of a button, the “barista” may prepare any beverage on the menu, including lattes and cappuccinos. It is resulting in a dramatic improvement in productivity and velocity.

The profile of the Mastrea is not immediately apparent and is not strictly a part of bean-to-cup machines. When designing the Starbucks coffee machine, the barista needed to be able to look over the top of the appliance.

What Does the Espresso Starbucks Price?

At first glance, the price tag of more than $17,000 for each Mastrena coffee machine may seem too high. However, considering this is four or five times as expensive as comparable commercial coffee machines, you might wonder why they even bother.

This isn’t your average espresso machine; instead, it’s an automated model designed to maximize productivity and consistency in its output.

You can get by with fewer people and a lower barista skill level while using one of them.

In just a few short months, they will have paid for themselves.

Where to purchase this Machine

Is opening a coffee business in your shop? Do you have $17,000 lying around (because let’s be honest, who doesn’t?)

Sorry to break it to you. You won’t be able to purchase one. They are not for sale regardless of the intended usage (commercial or otherwise).

Starbucks controls all intellectual property rights to the look, and Thermoplan Ag makes them solely for Starbucks.

The good news is that there are now several home bean-to-cup coffee makers that can compete with, if not surpass, the quality of coffee found at Starbucks. Most notably, they are available for much less than $7,000! Below is the link where you get the most delicate coffee machine.

Who makes espresso machines for Starbucks?

There are 21,000 Starbucks cafés worldwide, and the espresso machines used in them are manufactured by a modest Swiss firm with only 230 people. According to Bloomberg, the little Swiss town of Weggis, where Thermoplan AG is headquartered, is located on the edge of Lake Lucerne.

What espresso does Starbucks use for espresso shots?

What kind of espresso coffee does Starbucks use, specifically? Espresso roast coffee is ground and branded with the Starbucks logo. Besides the caffe latte, it’s also used in the cappuccino, americano, and mocha. Either in-store or online purchases are acceptable.

Therefore, it is the case. A small Swiss firm Thermoplan AG has an exclusive contract with Starbucks to produce its super-automatic espresso machine.

Good luck finding one of these machines for sale unless you’re willing to sift through the used-equipment market, which raises the question, “Is it even worth it?”

Rather than purchasing a commercial espresso machine, I recommend buying a home model equipped with a twin boiler, steam wand, and built-in coffee grinder if you’re serious about making delicious coffee at home. But hey, if you’ve got a peewee football squad, go for it!